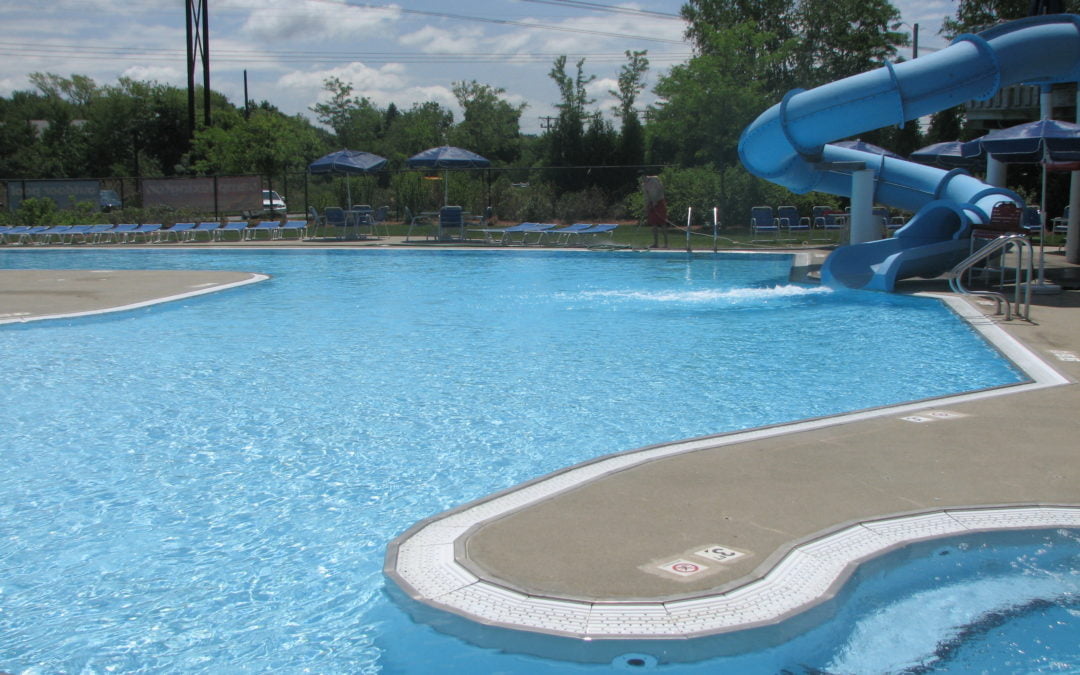 Yards Park is a wonderful open space in the Capitol Riverfront neighborhood of Washington, D.C. One of its main attractions is in the middle block of the park, where you’ll find a grand watershape with a footprint that covers an area spanning 20 by 135 feet.

At one end, there’s a fountain/waterfeature that immediately catches the eye. But the big draw – especially when the weather warms up – is the fountain’s basin, which occupies most of the space and, at just 11 inches deep, doubles as a play pool.

The system debuted to general praise just four years ago, but by the spring of 2015, few were having as much fun playing in the water: The basin’s interior had cracked, and the thick layer of paint that had been used to finish the interior surface had deteriorated and was littering the water with chips and flakes.

This is when we at Membrane Concepts (New Bedford, Mass.) were called in: We specialize in applying layers of polyvinyl chloride (PVC) to reseal and resuscitate watershapes with just the sort of issues facing the Yards Park fountain. Soon thereafter, the basin reopened to the public with a new black finish.

We had been contacted by Otis Williams, Director of Parks for the Capital Riverfront, at the suggestion of the staff of Cascade Fountain, a local maintenance company that services the cascading-waterfeature part of the installation. In doing his research, Williams learned that we’d previously lined a fountain at the White House – not a bad line item to have on our list of completed projects.

Our mission, he said, was to restore the Yards Park watershape as a visual treat and a beautiful architectural element in the park while also providing a safe, appealing place for children to cool off and play.

As built, the basin featured distinctive black-granite curbs along two sides. This is why we opted for a black PVC material (provided in this case by i2M of Mountain Top, Pa.): Although this product is usually applied in restoring commercial aquatic facilities – and is generally limited in use to creating lane markers within fields of light blue or white – we figured it would be a perfect fit with the black-granite walls. (Coincidentally, we’d used this same black material for the White House watershape mentioned above.)

On this particular project, we wanted to maximize the visual impact of the black PVC material within its black perimeter. To do so, we terminated the PVC membrane beneath the waterline, sealing the material at the outside edge of the floor at the base of the granite curb walls. We then used hard black plastic PVC strips with the liner caulked underneath to ensure a watertight seal – and a slick aesthetic appearance as well.

In all, we covered approximately 8,000 square feet of the basin’s floor, plus the finishing strip. The results are stunning – and the flakes and chips are a thing of the past.

Once we started our work on site, we saw that the fountain basin’s interior actually required very little by way of surface preparation. All we had to do, in fact, was dislodge the loose paint debris and sweep it up with brooms and dustpans.

This was possible because the basin was relatively new and its substrate essentially in good condition. The cracks we found turned out to be non-structural (despite the fact they apparently caused considerable leakage) and required no repair work; in fact, we were basically able to ignore them because, with the finish system we’d be applying, any underlying imperfections would be completely masked and sealed by the combination of the 150-mil felt underlayment and the waterproof, 60-mil PVC membrane.

Once the surface was cleared, we attached the felt to the substrate using a solvent-based contact adhesive to ensure a strong, permanent bond. The felt layer serves two purposes: First, it bridges and covers any surface imperfections; second (and more important for this project), it offers a “softer,” more comfortable play surface for the (mostly) young children who will be the main users of the basin.

With the felt applied, we brought in the rolls of PVC material – six feet in width by 80 feet long. We cut this material to shape and applied another layer of adhesive to secure it to the felt underlayment. We then welded the seams together to form a monolithic, watertight surface from wall to wall.

Along the way, we also paid special attention to the various penetrations we encountered, both for lights under the fountain spillway and for the basin’s system of drains. We started by applying a waterproofing agent, particularly down into the drainage sumps, then carefully applied and sealed the PVC material to ensure its permanent bond to the substrate.

As suggested above, there was also a practical side to this restoration process: Through all of its cracks, the basin was losing large quantities of water – so much, in fact, that Williams reported that it had to be topped off every other day to keep up. With the new lining, however, that refilling, now mainly for evaporative losses, takes place every two weeks instead.

Another bonus: With the black coloration, the material absorbs solar heat and warms the water enough that the park has seen a considerable reduction in its heating-related expenses. That’s an unusual line item with a display fountain, but given the way it’s used, this watershape comes complete with other pool-like systems, including an ultraviolet sterilizing system, a filtration system and chemical feeders that add residual amounts of chlorine as well as acid to keep the pH within specifications. All of these systems are backed up by a technician’s daily checking.

This rigorous monitoring is important now, because usage of the basin has climbed back up again after having suffering a good bit when the floating paint chips were a constant presence. There’s also been positive feedback about the smoothness of the surface and the cushioning effect the material imparts because of the felt underlayment.

It’s hard to imagine, but the restored fountain has been used simultaneously by up to 400 kids of all ages, and when the park hosts evening summer concerts, it’s more than likely that most of the 2,500 to 3,000 people in attendance will have dipped their toes in the basin to keep cool.

It’s all part of a day’s work for us, but for those who enjoy the park and its big fountain, it’s a special measure of joy and comfort on hot days – made much nicer by a smooth surface that will stand the test of many years’ service.

Ron Melbourne is general manager and owner of Membrane Concepts, a New Bedford, Mass.-based company specializing in the application of PVC linings in watershapes – mostly commercial swimming pools. An experienced pool builder, he is a graduate of The Ohio State University and holds an MBA from Bentley University. He may be reached via email at [email protected]